It has been a fascinating day and we got to stand close to Prince William or should I say that we got to stand under the balcony he appeared on. Troy Cassar Daley, the country music singer whom property and house was flooded presented the Prince with this akubera hat. 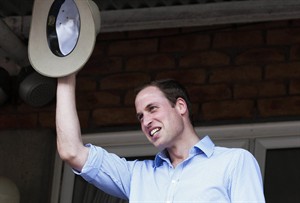 By The Associated Press (CP)

As I reflect on the brilliant afternoon I spent with my children and extended family it is the Country Music Singers and band members who deserve all the praise and glory for making this day really special.

Gina Jefferies had an idea to gather a few Country Music Singers and put on a free Concert to show support for the recovering South East Queenslanders that have been adversely affected by the January floods.

The Spirit of the Country, FREE Music Concert was the largest concert of its kind in Australia and it sole purpose was to lift the spirits of the locals. It wasn’t a fund raising concert.

My family and I didn’t have flood water flow through out homes, however like everyone in Queensland we have been financially affected by the destruction the water brought. We all have been volunteering our time and sharing our resources to help rebuild our communities.

My children have never been to any music concert and this was the perfect opportunity to take them to one. It was during the day, family friendly and all my favorite singers would be there.

John Williamson was the main act and in the early 80’s I travelled with my Mum and two brothers over an hour to watch him perform in concert and the experience set up my love for country music. In my humble opinion John is a genius and the ultimate music man, who only needs a guitar and hollow wooden box to perform.

Graham Connors, Gina Jefferies, Lee Kernighan and Kasey Chambers music appear on my frequently played i-music list. Today I enjoyed listen to my children sing along with these performers.

There was a curious look on there face as they recognised most of the songs being performed and a new association with a singer on a stage. We were far, far away from the stage but they could watch the big screen and they were fascinated by watching music and listening to it at the same time.

I would like to send out a big thank you to all the volunteers, singers and roadie that created and executed today’s Spirit of the Country Concert. The memories will stay with us forever.